Have you ever had any difficulty finding a suitable ASME calibration block for your inspection needs?

This post gives you 8 of the best-selling ASME calibration blocks in the industry today. So, if you’re ready to find more, let’s dive in.

Here are 8 of the best-selling ASME calibration blocks you should know about with their descriptions and features.

This ASME calibration block consists of holes drilled on two sides with a minimum depth of 1.5inch and 3/32 inch width. The distance apart for the two holes is half the diameter of the holes. It also features a top to bottom slot in the middle of the block with a 0.11T deep machined notch. Other dimensions of the notch include 0.04 width and 1.0T minimum length.

ASME basic calibration block features three drilled holes located at 0.25, 0.5, and 0.75 thickness on the sides. The minimum depth of the holes is 1.5 inches with a width of 3/32 inches. Other features include 2 EDM notches with a depth of 0.02 times the thickness, a maximum width of 0.25, and a minimum length that is the same as its thickness following ASME Sec V Art. 4.

An ASME UT block comes with four differently located holes situated at 0.1, 0.2, 0.3, and 0.4 of the material thickness. These holes are also consistent with the beam exit marks of 70° placed on both sides of the block. The block also features a dual EDM notch situated at 0.05 and 0.1 of the block’s depth with a width of 0.011 and a length of 0.5.

This ASME calibration block has a thickness of 19mm and a minimum length of 200mm or 8T – whichever one is greater. It also features two drilled holes with a minimum distance of 25mm apart and a minimum radius of 270° when the inner diameter is not more than 100mm. The material is often dependent on the tested sample material but can usually be made from carbon steel, aluminum, and stainless steel.

An ASME angle beam calibration block has a thickness of 1 inch but can also be of a lesser thickness with a material dimension of 0.750″ x 6″ x 7″. It also features two slots with each face having a slot and 1.5inch holes drilled to the sides. Also, the holes’ width is dependent on the thickness. It is manufactured with either carbon steel, aluminum, or stainless steel.

This pipe measuring ASME test block is primarily designed for ultrasonic testing in pipes with specific parameters to return accurate results. These parameters include four axial and circumferential notches at 0.08T depth, where T is the thickness of the block. The notches are also 0.04T wide with a minimum of 1 in length. Also, various arc sections are 60 – 360 degrees depending on the specified NPS.

This phased array calibration block meets the ASME specification in Sec V Art 4 with features that include three drilled-through holes at 0.25T, 0.5T, and 0.75T, where T is the thickness of the block. The holes are also 3/32 inches in diameter, separated along the length of the block. It is usually available in 0.75-inch or 1.5-inch thickness, 1.5 inches wide, and 14 inches long. Other features include dual RDM notches with their depth at 2% and 0.01 inches wide and 1.5 inches in length.

This section gives you all the information you need to know when in the market for an ASME calibration block.

1. What is ASME Calibration Block? 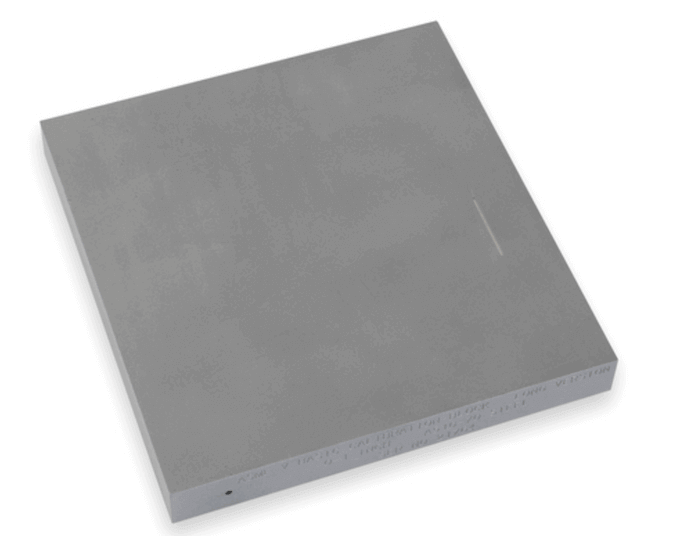 Like all other calibration devices, an ASME calibration block is a non-representative device, meaning that they are designed to meet certain specified and standard discontinuities without being made from the sample. The standard, in this case, is the American Society of Mechanical Engineers (ASME), and the applicable discontinuities often include angles, holes, and radii. However, ASME calibration blocks still follow the same sequence and machine operations employed in manufacturing other metal parts employing tools like engravers, milling machines, lathes, power saws, and surface grinders. Yet, these calibration blocks accurately meet the requirements in the relevant sections of ASME’s code.

2. What are the Applications of ASME Calibration Block?

The ASME Calibration Block is a primary reference tool for ultrasonic testing used in industrial works like welding. This makes it very important for industries and operations where welding is a major activity, and quality assurance is a critical part of the welding process.

3. How to Select ASME Calibration Block?

Here are some of the most critical things to note when selecting a suitable ASME calibration block for your needs.

While you are up and about in selecting a suitable ASME calibration block, choosing a suitable supplier should also be of importance to you. Here is the thing, while you might find what ASME calibration block you think will be ideal for your testing and calibration needs, the supplier you’ve chosen might not be reliable enough to give you what you ordered. Sometimes delays in production and shipping can often let you down, causing you to lose time and money.

However, NDT-KITS is a Chinese manufacturer of ASME calibration blocks with over three decades of industry experience and a stance that has made them a leading industry supplier. Their investment in research and development is huge, giving them the ability to help customers meet their quality inspection needs. They are also supportive of their customers at every point in purchasing a suitable ASME calibration block. Their customer support team is always ready to respond to inquiries from customers. Their commitment to quality is also very high as they have the necessary international certification like the ISO 9001:2015 quality management system to assure their customers. Again, being a Chinese manufacturer avails them of abundant human resources, making their production costs less than their European and American counterparts, ensuring competitive prices for their products.

➤ Related Article: How to Import Calibration Blocks from China?

Selecting an ASME calibration block can be daunting, but you are halfway there if you know the critical things to look out for and the critical parameters to consider. Checking out for things like the diameter, material, and accessories needed for the calibration block should be an essential consideration. However, the most important thing is getting a dependable, trustworthy supplier with substantial industry experience and a commitment to quality without being unreasonably pricey. These qualities make NDT-KITS a leading supplier of ASME calibration blocks.