What is Angle Beam Testing?

In this blog post, you’ll read:The angle beam testing is commonly used for ultrasonic flaw detection. It is effective to detect common flaws like discontinuities.

Have you always wondered what quality inspectors mean when they talk about angle beam testing?

While most ultrasonic testing uses straight beam testing because the anticipated flaw is parallel to the surface, some situations require the use of a testing device that can identify flaws that are perpendicular to the surface of the test sample. For such cases, an angle beam is often very effective. Hence, an angle beam transducer is often required to carry out these tests.

In this post we will give you all the information you require to choose the correct angle beam transducers including its working principle, applications, and their differences from straight beam transducers.

I. What is Angle Beam Testing?

Angle beam testing requires the use of angle beam transducers which use the refraction principle and boundary point mode conversion to create shear waves to identify flaws in sample objects. These angle beam transducers like all ultrasonic testing devices convert only detect ultrasonic signals which are frequencies that fall between 1 – 10 MHz. Sometimes, they have transducer wedges that are separate from the main housing. However, they come pre-fitted into the main housing in most cases.

Unlike straight beams that are not effective for detecting perpendicular-to-surface flaws, angle beam transducers are precise and accurate at measuring flaws that are mostly vertical and perpendicular to the surface of the test sample. Also, a beam transducer is very accurate at measuring flaws in welding operations when considering the flaws orientation, the weld geometry, and the weld crown needing examination with the beam projected at an angle from the weld side. 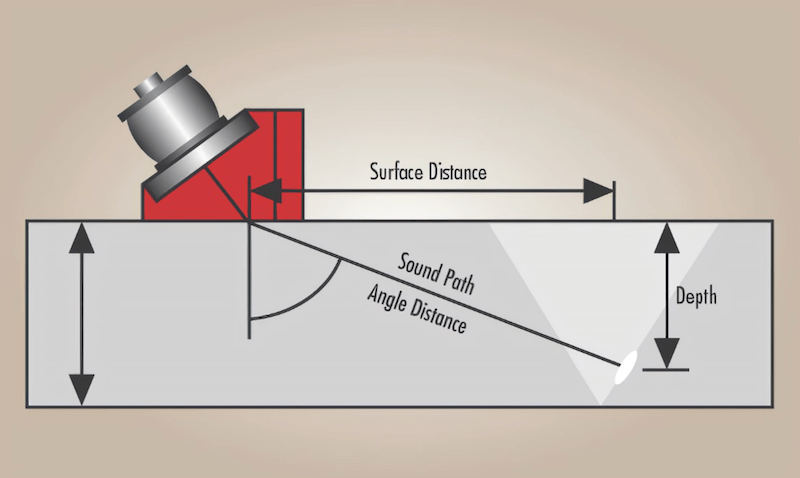 ➤ Related Article: Everything you Want to Know About Ultrasonic Testing

For straight beam testing, transducers often project longitudinal waves that are parallel to the surface of the sample under examination and are often used to identify flaws in the same parallel plane. These flaws can include porosity, cracks, and delamination.

Also, the transducer type can be contact, immersion, dual, or delay line transducers which can all generate longitudinal waves only. However, they can also identify flaws in components like bars, castings, forgings, test plates, and bolts which often have flaws parallel to the test plane. Moreover, they employ the principle of ultrasonic wave travel through a medium which is simply the continuous movement of ultrasonic sound waves until it encounters a barrier like cracks or voids within a medium.

III. What is the Difference between Straight Beam and Angle Beam Transducer?

While they both share similarities like overall testing principle and signal generation and conversion for flaw detection, straight beam, and angle beam transducers both have several differences that makes them unique.

Again, their applications which are based on the type of flaw they detect are also different. While straight beam transducers are generally the best for defects like delamination in components like plates and hanger pins, angle beam transducers are accurate for pipes and tubing where flaws are at an angle to the test material surface. 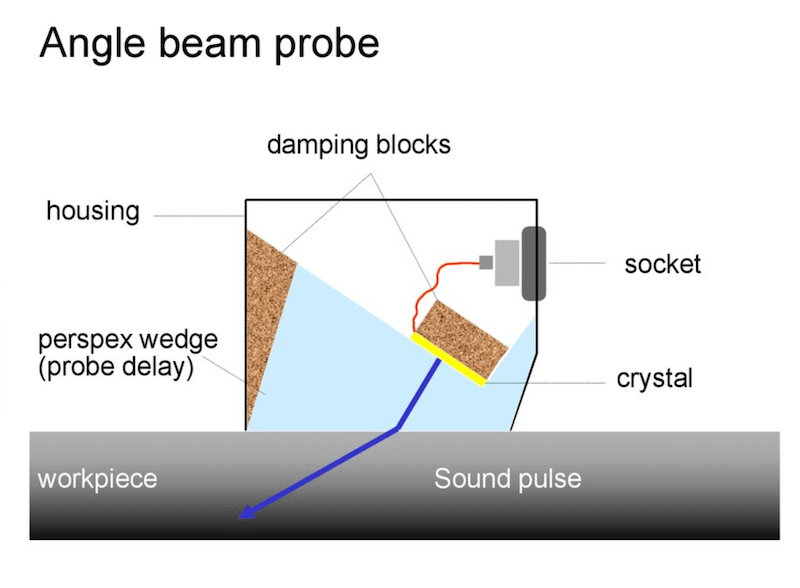 IV. What are Features and Benefits of Angle Beam Testing?

The primary objective of angle beam testing is to ascertain the integrity and quality of welds and sample objects using angle beam transducers and their accompanying accessories like wedges. However, they feature easy back and forth scanning within a short approach distance. But essentially their main feature is the piezoelectric element which is usually a single element that can both generate and receive ultrasonic signals with this single element. Additionally, they feature a wedge that both be inbuilt or separately built from the main housing for easy assemblage. Also, the wave form is often a refracted shear wave to efficiently detect flaws which are perpendicular to the test sample’s surface. Needless to say, that with all these features angle beam testing provides some unique advantages over straight beam testing including

V. What are Applications of Angle Beam?

With the projection of angle beam to detect perpendicular flaws, angle beam transducers have specific use cases that make them unique especially for certain applications. These applications include: 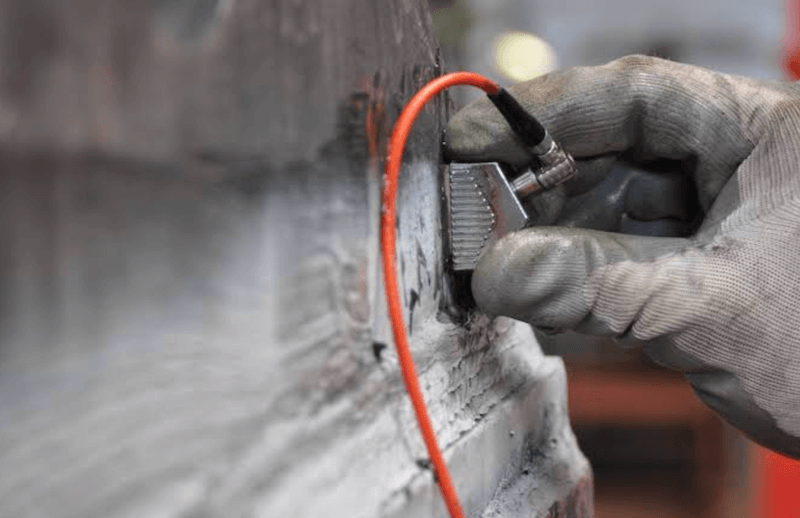 VI. How to Choose Your Angle Beam Transducer?

In numerous cases, inspectors use various standard codes to choose the angle beam transducer that they intend to use for certain quality assessment inspections. Nevertheless, some critical parameters determine the choice of a suitable angle beam transducer for any given inspection. These parameters include the frequency of the transducer, the beam angle, and the element size. These three parameters are key to choosing the right parameter and they are highlighted below along with other essential factors.

➤ Related Article: How to Choose the Right Ultrasonic Transducer?

To conclude, angle beam testing is a unique testing method whenever ultrasonic non-destructive testing is involved. The difference between straight beam testing and angle beam testing makes it even more preferable in ultrasonic testing as it ensures the capture and identification of angular or perpendicular flaws in sample objects. Nonetheless, understanding its working principle is important in order to ascertain its suitability for your inspection use. Again, knowing the parameters to consider when choosing the angle beam transducer is equally critical in choosing the right model. Ultimately, things like frequency, element size, and the angle of the wave generated can significantly affect the accuracy of the results you get.

4.9/5 - (58 votes)
PrevPreviousWhat’s the Advantage and Limitation of Ultrasonic Testing?
nextHow to Choose the Right Ultrasonic Transducer?Next