9 Reasons Why You Need a Metal Conductivity Meter

Electrical conductivity tester is a tool that test the conductivity of the metals. like aluminum, copper, and other non-ferrous metals.

I. What is the Conductivity of Metal?

The conductivity of metal is defined as the measure of metal’s ability to transfer electric charge, heat, or sound.

Pure metals provide the best conductivity. Only the impurities in most metals restrict the electron flow. That’s how alloys (a combination of alloying agents with pure metals) offer less conductivity compared to pure metal.

Depending upon the application, it is mandatory to understand a material’s tendency to conduct. For example, the wire can readily conduct electricity. Similarly, heat exchanger and radiator tubes readily transfer heat. To achieve this objective, we perform a conductivity test, a part of non-destructive testing (NDT).

Conductivity exists constantly as long as there are free charges (ions or electrons) inside the metal. Metals comprise of symmetrically distributed crystal grid structure that has ions. The conductivity also determines the properties of the material. If the crystal grid gets disturbed due to alloy addition or flaws, the conductivity changes according to the degree of grid distortion.

II. Why do we need to Assess the Conductivity of Metal?

There are a few requirements for why we should test the conductivity of the metal.

Electric conductivity shows how well an object will allow electricity to travel through it.

There are two methods available to evaluate the electrical conductivity of metals:

This method involves pulling the metal into a wire, intercept a section, and bridging to test the electrical conductivity of the given object. But there are several disadvantages to assess metal conductivity using the traditional electric bridge method. This process is cumbersome to operate, time-consuming, and labor-intensive. This practice is not feasible, since the accuracy of the reading is also not guaranteed.

2. Eddy current method
Eddy current is defined as the localized circular electric current induced in a conductor by a varying magnetic field. This non-destructive conductivity test using the eddy current method measures the conductivity of non-ferrous metals based on the electrical industry’s workpiece conductivity requirements. This method is very simple and comparatively easy to implement. It is used to check quality control for enterprises and research institutions in the production line. This test abides by the national standards. 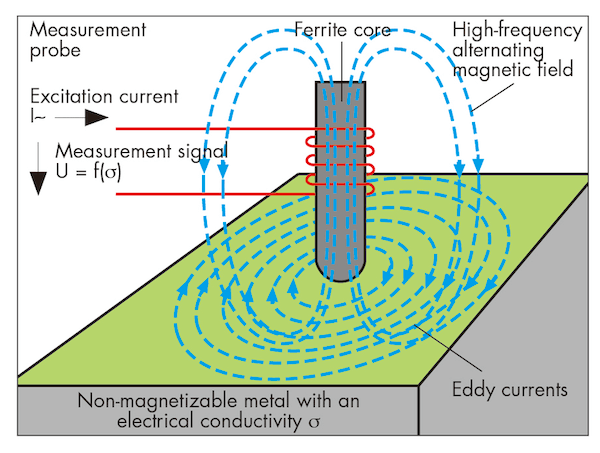 When the intercepted alternating current of the coil (also known as the probe) comes in contact with the surface of the conductive material, it induces vortex-like current due to the action of the alternating magnetic field of the coil. The eddy current that develops in the material in turn produces its own magnetic field to react with the coil. The magnitude of this reaction is related to the conductivity of the material at and near the surface, as shown in the figure.

➤ Related Article: How to Use Eddy Current for Conductivity Measurement?

Here’s what you need to pay attention while performing a conductivity test: